Victor Broccoli is a workers’ compensation attorney with Garces, Grabler & LeBrocq. Victor is proud to focus his practice exclusively on the rights of injured workers. For the past eight years, he has regularly appeared throughout workers’ compensation courts in New Jersey. His passion is for making sure that people injured on... 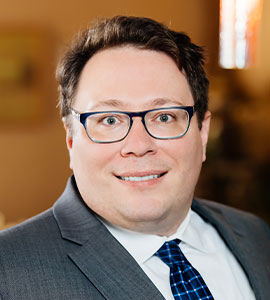 Victor Broccoli is a workers’ compensation attorney with Garces, Grabler & LeBrocq. Victor is proud to focus his practice exclusively on the rights of injured workers. For the past eight years, he has regularly appeared throughout workers’ compensation courts in New Jersey. His passion is for making sure that people injured on the job get the medical treatment and compensation they deserve.

Victor is a proud member of the New Jersey Advocates for Justice (NJAJ). In recognition of his abilities, he has been named a New Jersey Super Lawyers Rising Star from 2018-2021.

Prior to joining Garces, Grabler & LeBrocq, Victor managed the workers’ compensation department for a general litigation firm. He has a track record of securing the best possible outcomes for his clients by being diligent, thorough, and responsive. Before focusing his practice on representing injured workers in New Jersey, Victor maintained a general law practice in North Carolina.

Victor received his Bachelor of Arts in History from Boston College in 2007. In college, Victor studied international business at The Beijing Center in Beijing, China. He then received his Juris Doctor from Tulane University Law School in 2010. While at Tulane, Victor received honors designation for trial advocacy. Victor was also a member of The Sports Lawyers Journal, which published his articles on state drug testing laws and NCAA regulation of social media in athletic recruiting.

Great Attorney services and the office team is helpful and efficient-especially Manuel in the Plainfield location.

Plaintiff was a passenger in her husband’s vehicle at a stop light when it was struck from behind by defendants vehicle. Plaintiff injured her neck and back resulting in pain management and neck surgery.

44-year-old motorist struck when the defendant failed to stop at a red light resulting in significant back injury including surgeries. Read more…