Michael is a lifelong resident of Middlesex County who has devoted the entirety of his legal career to the practice of workers' compensation and personal injury litigation. One-hundred percent of Michael's practice focuses upon the representation of seriously injured persons... 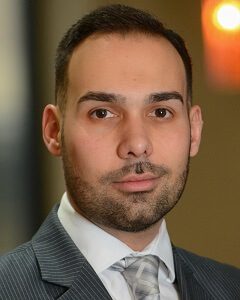 Michael is a lifelong resident of Middlesex County who has devoted the entirety of his legal career to the practice of workers' compensation and personal injury litigation. One-hundred percent of Michael's practice focuses upon the representation of seriously injured persons. Michael has appeared in every workers' compensation court in the State of New Jersey; and has substantial experience obtaining favorable settlements on behalf of those deprived by insurance companies.

Michael is licensed to practice before both the state and federal courts of New Jersey as well as the state courts of New York. Prior to joining Garces, Grabler and LeBrocq, Michael spearheaded the New Jersey workers' compensation department at a nationally-renowned 1,300-attorney firm. While working at that firm, Michael litigated an abundance of accidents where individuals were exposed to occupational hazards or toxic chemicals. Moreover, Michael is well-versed in litigating claims where individuals are injured by tractor trailers or while ridesharing. Furthermore, Michael has handled a wide array of medical malpractice cases involving novel medical procedures and complex injuries.

Additionally, Michael worked as an in-house trial attorney for New Jersey's largest auto insurer. There, Michael managed a heavy caseload comprised of automobile, motorcycle and pedestrian accidents; and regularly litigated first-party claims arising out of uninsured/underinsured (UM/UIM) motorist coverage. While working in-house, Michael handled all facets of litigation -- from intake to opinion. He has tried a slew of jury trials to verdict with an overwhelming success rate for his clients. Michael uses his inside knowledge of how insurance companies negotiate to assure his clients are fairly compensated.

Michael takes great pride in knowing each of his clients personally; and strives to provide each client with the utmost customer service and rapid response times.

Personal Injury
Animal and Dog Bite Attorney in New Jersey. Although we generally love our pets, animal owners are responsible for their pets, including any harm that the animal may inflict on another person. Garces, Grabler & LeBrocq is a personal injury firm dedicated to getting favorable verdicts and settlements...
Read more

A 41-year-old man went to the hospital several times complaining of stomach pains. Each time, he was told that he had Gastritis. Several months later, with worsening pain, he went back and was diagnosed with Stage Four Stomach Cancer. He died six months later.

Plaintiff was driving on Highway 27 when his vehicle was struck from behind by defendant. He sustained disc injuries to his cervical spine requiring surgery.