David Corvasce is an associate attorney at Garces, Grabler & LeBrocq with the firm’s Personal Injury Department. He specializes in litigation with a focus on catastrophic personal injury. Mr. Corvasce has argued cases in every Superior Court in New Jersey and its Appellate Division... 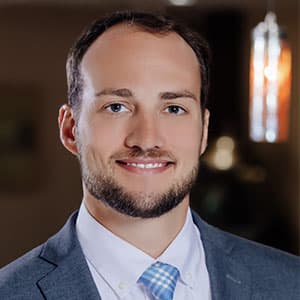 David Corvasce is an associate attorney at Garces, Grabler & LeBrocq with the firm’s Personal Injury Department. He specializes in litigation with a focus on catastrophic personal injury.  Mr. Corvasce has argued cases in every Superior Court in New Jersey and its Appellate Division. He has litigated Section 1983 wrongful death claims and Late Notice of Tort Claims before the United States District Court and New Jersey’s Appellate Division.

Prior to joining the Garces, Grabler & LeBrocq, David worked as a trial attorney with one of New Jersey’s most well respected defense firms. There he represented national insurance carriers and government municipalities in all stages of the litigation process, including trial. Earlier in his career, he worked as in-house trial counsel for the largest property and causality insurance company in New Jersey. Mr. Corvasce has developed strong relationships with Judges and defense attorneys. He now utilizes his defense experience representing clients that were injured by negligent acts of others. He prides himself in always putting his client’s best interests above all else.

Mr. Corvasce graduated from Lafayette College where he earned a bachelor’s degree in Biology and Political Science in three years. Subsequent to graduating law school with honors, Mr. Corvasce completed a one-year judicial clerkship with a Trial Judge in the Law Division of the Superior Court of New Jersey. At that time, he also served as a New Jersey Supreme Court Certified Trained Mediator handling landlord/tenant and small claims actions. Mr. Corvasce enjoys hiking and athletics in his free time.

Personal Injury
Property owners have a duty to keep their properties safe. But what if a loose railing is overlooked and you or a family member falls down the stairs? What if a visitor falls on the sidewalk leading to the building? Or what if a delivery person slips on the sidewalk? Slip and fall accidents happen...
Read more

Personal Injury
Did you know according to the federal government, per mile traveled in 2006, there were 35 times more deaths from motorcycle accidents than from car accidents? It makes sense because they’re much smaller and lighter than cars, only have two wheels, and don’t enclose the rider in a box of metal...
Read more

The staff was very professional. Every time I had a question or concern, it was promptly answered. I am 100% satisfied with the outcome. It was a slam dunk. Great job GGL!

A 25-year-old woman was hospitalized and needed intubation. A doctor did not properly perform the procedure, depriving her of oxygen and leaving her in a coma with irreversible brain damage. She died several months later.

30 year-old laborer suffered severe head and neck injuries in a forklift accident that was not properly maintained while working. Read more…