Christina began her legal career at a Bergen County plaintiff’s firm, representing clients in personal injury and other civil litigation matters from inception to trial. Since joining Garces, Grabler & LeBrocq as a senior associate, Christina continues to be an aggressive and zealous advocate for her clients. 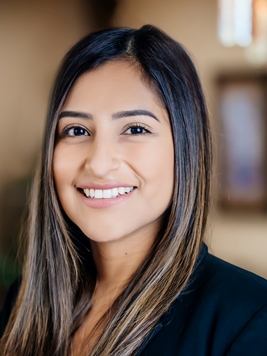 Christina M. Galarza obtained her bachelor’s degree in Political Science at Rutgers University in New Brunswick, New Jersey. After graduating, Christina went on to receive her J.D. from Rutgers Law School in Newark, where she made Dean’s list.

While in law school, Christina served as the President of the Association of Latin American Law Students, was a senior editor of the Computer and Technology Law Journal and a member of the Minority Student Program.

Christina began her legal career at a Bergen County plaintiff’s firm, representing clients in personal injury and other civil litigation matters from inception to trial. Since joining Garces, Grabler & LeBrocq as a senior associate, Christina continues to be an aggressive and zealous advocate for her clients in a wide range of cases.

She has been advocating for those who have been injured or lost loved one due to the negligence of others since graduating from law school in 2016. Christina has been named a New Jersey Super Lawyers Rising Star for two consecutive years.

Personal Injury
Property owners who own and operate property are legally responsible for the safety of those who are on their property. They must maintain the property in a safe manner, in an attempt to protect people from foreseeable dangerous situations...
Read more

Personal Injury
Animal and Dog Bite Attorney in New Jersey. Although we generally love our pets, animal owners are responsible for their pets, including any harm that the animal may inflict on another person. Garces, Grabler & LeBrocq is a personal injury firm dedicated to getting favorable verdicts and settlements...
Read more

Personal Injury
Any automobile accident has the potential for serious injury, but because of a truck’s size and weight, the results could be devastating. Plus, with the rigid truck safety regulations and industry standards that come with operating trucks and tractor-trailers, filing a lawsuit for a truck accident can be even more complex...
Read more

Personal Injury
Property owners have a duty to keep their properties safe. But what if a loose railing is overlooked and you or a family member falls down the stairs? What if a visitor falls on the sidewalk leading to the building? Or what if a delivery person slips on the sidewalk? Slip and fall accidents happen...
Read more

Sarah and John have been very helpful and comforting through this experience. Thank you to all the staff that are providing assistance!

Best representation I ever had in a case was truly very happy will highly recommend this firm to anyone I know injured at work
Recent GGL Victories
$241,000
Auto Accident

48-year-old motorist was rear-ended by a tractor trailer and sustained injuries to his lower back and neck.

42-year-old valet parking attendant was helping a customer in front of her vehicle when another vehicle backed up into her, pinning her between both vehicles, resulting in a lower back injury.

24-year-old motorist driving the left lane when a cement truck in the right lane next to her attempted to make left turn resulting in a collision. She sustained injuries to her lower back that required surgery.