Henrique joined the Workers Compensation Department at Garces, Grabler, & Lebrocq in January of 2018. Previously he was an Associate at the Law Office of Ariel Alvarez, where he handled closings, municipal court cases and a variety of cases as a general practitioner... 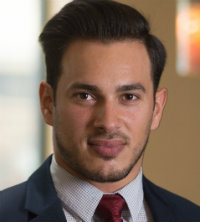 Henrique joined the Workers Compensation Department at Garces, Grabler, & Lebrocq in January of 2018. Previously he was an Associate at the Law Office of Ariel Alvarez, where he handled closings, municipal court cases and a variety of cases as a general practitioner during his first year of practice.

Henrique received a Bachelor of Arts from William Paterson University, where he studied Political Science.  He then received a Juris Doctor from St. Thomas University School of Law. While attending law school, Henrique was an intern at Broward County Legal Aid in Florida and at the Passaic County Prosecutor’s Office.

Henrique is licensed to practice law in New Jersey and in the Federal District Court of New Jersey, and is fluent in Portuguese and Spanish.

I didn't know what to expect at first but the staff as well as the representation was top notch. Would easily have them represent my family again if needed.

This law firm is very committed to their clients and wants what’s best for them. They worked with me for some time and put in so much effort and the outcome was very satisfying.

Settlement from a rear end motor vehicle collision in which the plaintiff required fusion surgery to his neck.

Settlement from a rear end motor vehicle collision in which plaintiff required surgical intervention to his lumbar spine.