Daniel Spafford graduated from California State University in 2010, earning a Bachelor's of Science in Business Management. He went on to attend Rutgers Law School, and received his J.D. in 2015. Prior to graduating, he made court appearances and worked on cases... 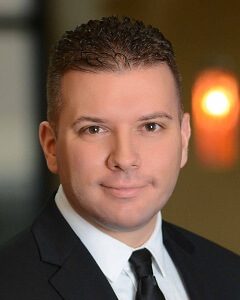 Daniel Spafford graduated from California State University in 2010, earning a Bachelor's of Science in Business Management.  He went on to attend Rutgers Law School, and received his J.D. in 2015.  Prior to graduating, he made court appearances and worked on cases under the supervision of his professors in the Criminal and Social Justice Clinics.  As a student attorney, he appeared before Superior Court and Administrative Law Judges, winning favorable settlements for his clients each time.  After graduating, he spent a year working at the Law Offices of Evan F. Nappen, appearing in municipal and superior courts on both criminal and family matters across New Jersey.   Eventually, Mr. Spafford found an interest in Workers' Compensation law.

His experience has allowed him to develop a unique perspective.  Before becoming a petitioner's attorney, Mr. Spafford made court appearances on behalf of employers and medical providers.  In these roles, he was able to gain intricate knowledge of defense strategies and medical procedures.  Ultimately, however, he wished to be an advocate for those actually injured in these matters.  This compelled him to seek a position at Garces, Grabler and Lebrocq.  He joined the firm in October of 2018.

Mr. Spafford is licensed to practice in the State of New Jersey and in the Federal District Court of New Jersey.    He appears in various courts in different counties over the course of each week.  A strong negotiator and aggressive litigator, he thrives in the courtroom and treats each client like family.

Workers Compensation
New Jersey is an “at will” employment state, meaning your employer has the right to fire you for just about every reason, whether or not there’s actual cause. Even if your boss just doesn’t like you for personal reasons, in our “at will” state, firing you likely isn’t against the law...
Read more

I’m very satisfied with their service.

Great and Professionals Team Sarita Nunez took my case and I'm so thankful for all her work. I recomend this company of Lawyers..
Recent GGL Victories
$210,000
Work Accident Injuries

30 year-old laborer suffered severe head and neck injuries in a forklift accident that was not properly maintained while working. Read more…

56-year-old construction worker suffered significant brain damage after a ladder slipped out from underneath him while he worked on it.